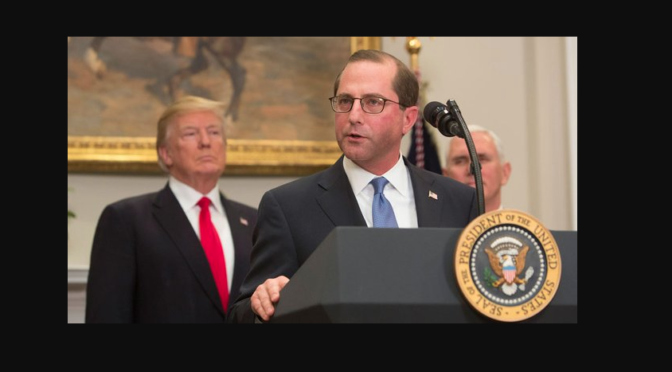 Drug companies would be required to list prices in advertisements under a Trump administration proposal released Monday.

Under the new proposal, which was announced by Health and Human Services Secretary Alex Azar, drug manufacturers would need to state the list price of a 30-day supply of any drug that is covered through Medicare and Medicaid and costs at least $35 a month.

“Patients deserve to know what a given drug will cost when they’re being told about the benefits and risks it may have,” Azar said during a speech Monday in Washington, D.C.

The proposal will be officially published Wednesday, and will be open for public comment for 60 days.

According to HHS, the 10 most commonly advertised drugs have list prices ranging from $535 to $11,000 per month for a usual course of therapy. Under the proposal, companies would be required to post that information in clear, legible text onscreen at the end of the ad.

HHS officials said the agency will publish a list of companies that don’t comply with the policy. Those companies would also be subject to potential litigation, officials said during a press call.

The pharmaceutical industry opposes the proposal, arguing it would confuse consumers because a drug’s list price is often lower than what the patient will actually pay.

PhRMA, the deep-pocketed trade group representing pharmaceutical companies in the U.S., tried getting ahead of Azar’s announcement, telling reporters Monday morning that its members would begin directing patients to more information about drug costs in television ads.

Every ad mentioning a prescription drug by name will include a voiceover or text telling patients to go to a company-sponsored website where they can find information about the list price, as well as a range of potential out-of-pocket costs and potential patient assistance.

“We want patients to have more cost information and support using direct-to-consumer advertising,” said PhRMA President Steven Ubl, but “just including list prices is not sufficient and would be misleading.”