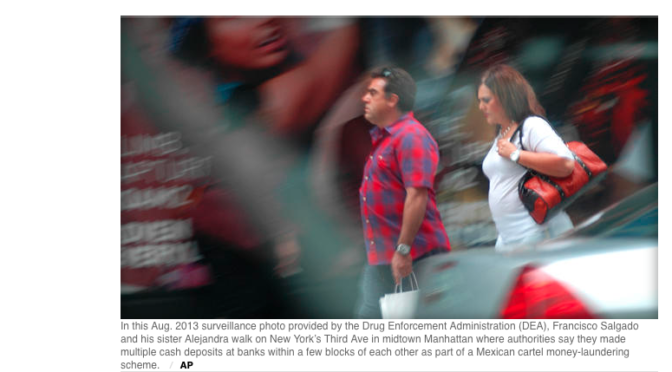 NEW YORK — In the photos, Alejandra Salgado and her little brother Francisco look like ordinary tourists strolling the streets of midtown Manhattan. He carries a shopping bag. She wears a white dress, a necklace and a leather tote slung over one shoulder.

But the outings were hardly innocent.

Over two hours, federal agents snapped pictures as the pair visited seven banks, stopping at each one to make cash deposits of just under $10,000 — all from piles of drug money stashed in their bags.

Prosecutors say the flurry of modest deposits was one of the many schemes hatched by Mexican crime cartels trying to bring billions of dollars in drug proceeds back from the United States without attracting scrutiny from banking regulators.

The cartels collect much of their cash proceeds from the U.S. market much the way the cocaine and other drugs come in, by sneaking it across the border.

But using regular banks remains in the mix, said James Hunt, head of the Drug Enforcement Administration’s New York City office. The trick is keeping deposits small, because banks are required to report cash deposits of $10,000 or more to the government. The benefit, he said, is that if investigators do catch onto such a scheme, less cash gets confiscated. The bagmen also often face less jail time.

“It’s a little more time-intensive but it’s not as heavy a hit if you get caught,” Hunt said.

Before they went to prison late last month, the Salgados were paid to launder up to $1 million a month collected from drug wholesalers doing business with the notorious Sinaloa cartel, prosecutors said.

Investigators say Alejandra Salgado, 59, who has a Mexico City address and was in the U.S. on an expired visa, was supervised by a high-ranking member of the cartel.

Agents began watching her in New York after her name came up in an investigation of money-laundering cells in southern California, Michigan and Arizona being conducted by investigators from the DEA Drug Enforcement Task Force, Department of Homeland Security, the IRS and local agencies.

Details from the case files of federal agents and narcotics prosecutors provided to the AP offer a look inside how the Salgados operated.

At one point she had been a courier who would drive drug money over the border.

But later, she was assigned by cartel leaders to deposit funds into multiple bank accounts held under fake names, then write checks to a produce company in San Diego controlled by the cartel.

An undercover investigator wearing a wire recorded her calling the assignment a “hassle,” but safer than her previous gig.

After her handler told her there was “a lot of work” for her in New York, she and her brother, a legal resident with an Alaska address, set up shop at a Manhattan hotel in the summer of 2013.

She preferred to collect payments from local drug dealers in midtown, rather than in their home territories in the Bronx or Washington Heights, for security reasons.

“Like a friend of mine said: ‘This is a business for tough people,’” she said in a conversation with the undercover agent. “And it’s all based in trust.”

While under investigation, the siblings made at least two dozen deposits in amounts ranging from about $8,100 to $9,600 at banks located from the Upper West Side to Canal Street.

Following the money trail was worthwhile to “gain insight into the practices” of the cartels, said Special Narcotics Prosecutor Bridget G. Brennan, whose office prosecuted the case.