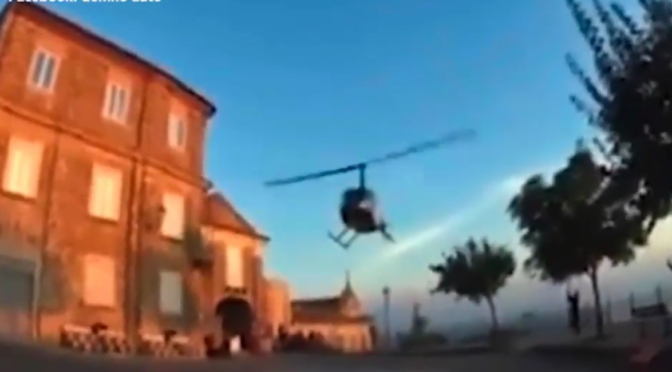 Prosecutors in Italy are investigating how the alleged grandson of a mafia boss managed to close down traffic and land a helicopter in the crowded main square of a small Calabrian town to celebrate his wedding day.

Antonio Gallone, 31, tied the knot with his bride Aurora before celebrating with a lavish seaside spectacle complete with red carpet, Ferraris, Maseratis, and a helicopter drop-off in the main city square to a throng of cheering onlookers.

After their religious ceremony, the bride and groom took off from a nearby airfield in a Robinson 44 Ipema helicopter for an hour-long scenic flight over the Aeolian islands at sunset.

When the couple returned, their helicopter flew right over the main castle square, hovered for a moment, then touched down right in the heart of town, where traffic had been closed off for three hours.

The ancient hilltop town of Nicotera in the Calabrian province of Vibo Valentia is a known stronghold for the ‘Ndrangheta, one of the world’s richest, most powerful crime syndicates.

Nicotera’s city administration was disbanded twice in the last decade for mafia association.