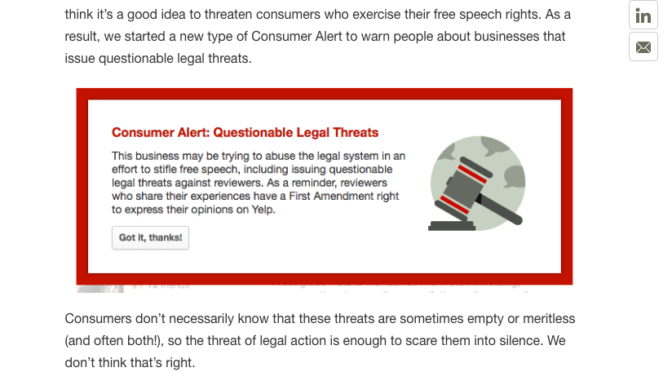 NEW YORK (CBSNewYork) — Yelp is trying to ease consumers’ worries about posting a negative review of a business online.

CBS2’s Alice Gainer reported Yelp issued a new type of consumer alert of the pages of businesses that have threatened customers with legal action.

The alert reads in part: “This business may be trying to abuse the legal system in an effort to stifle free speech. Reviewers who share their experiences have a First Amendment right to express their opinions on Yelp.”

Last summer, Dr. Nima Dayani, an endodontist, filed a defamation lawsuit against a reviewer after the patient called the doctor “curt” and “dismissive,” said there was a long wait time and gave a three-star review. However, the reviewer also stated the doctor was genuinely interested in finding a cause of the pain.

It wasn’t the first time Dayani sued a reviewer.

In a statement, Dayani said he readily accepts criticism, but when he sees a review that contains an assertion that he says is not true, he first asks the reviewer to take it down, and if they don’t, then he takes legal action.

Dayani’s listing on Yelp is the third to get this kind of consumer alert.

A Texas pet sitting service and a Florida moving company also have them. Michelle Douchouquette and her husband were sued when Prestigious Pets in Dallas said the couple violated a non-disparagement clause.

“When I say it out loud, saying I’m getting sued up to $1 million over this review, I can’t believe it,” she said. “I don’t think it was hateful. It didn’t have bad intent. It’s my opinion of a business.”

“We need to encourage people to speak their mind,” Siegel said.

However, Siegel added that reviewers must be stating the “absolute truth.”

“When you’re speaking your mind make sure what you’re saying is the absolute truth,” he said. “It it’s not truthful, they do run a risk that a business can claim their reputation has been injured and they could bring a defamation lawsuit, although it’s hard to win a defamation lawsuit.”

Siegel also said that Yelp should change its wording of the alerts and take out First Amendment.

Two bills have been introduced in Congress: the “Right to Yelp Bill,” also known as the Consumer Review Fairness Act, and the Speak Free Act. It would prevent businesses from suing over negative reviews.