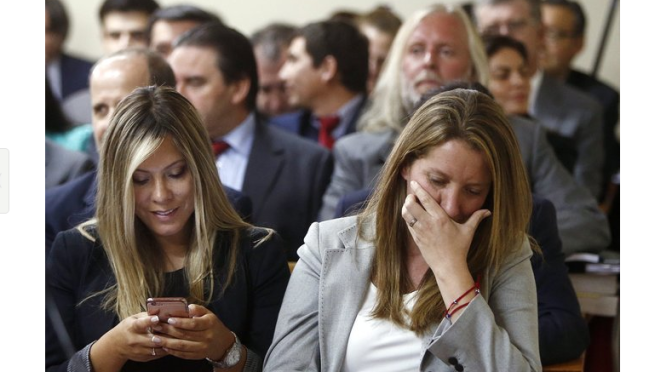 SANTIAGO, Chile — Prosecutors on Friday charged President Michelle Bachelet’s daughter-in-law, Natalia Compagnon, and 12 others in a corruption case that touches the presidential family and has damaged Ms. Bachelet’s popularity.

In a court session shown on national television, the prosecutors, Luis Toledo and Sergio Moya, accused Ms. Compagnon and her business partner in the firm Caval, Mauricio Valero, of issuing false invoices in a scheme to avoid paying about $165,000 in taxes. The court ordered Ms. Compagnon not to leave the country and confined several other defendants, including Mr. Valero, to their homes at night.

The defendants in the case include other Caval employees, former bank and municipal officials, a businessman and several lawyers, who were charged with a number of crimes. Five of them, including Mr. Valero, were also accused of bribery. Prosecutors said they were all involved in a speculative land deal that yielded millions of dollars in profit for Caval, with large kickbacks paid to those who facilitated it.

A Chilean magazine, Qué Pasa, reported last year that Caval, a small firm started by Ms. Compagnon and Mr. Valero in 2012, had secured a $10 million loan to buy about 270,000 acres of rural land in Machalí, south of the capital. At the time, the municipality was considering rezoning the land for urban development, which would greatly increase its value.

The Bank of Chile approved the loan the day after Ms. Bachelet was re-elected in December 2013, after a meeting Ms. Compagnon and her husband, Sebastián Dávalos, had with a vice president of the bank.

When the deal came to light, public attention focused at first on how Caval had come to know that the land would be rezoned and whether Ms. Compagnon and her husband had done anything improper to obtain the loan. Mr. Dávalos soon resigned from a position on his mother’s staff overseeing government-sponsored charitable foundations and social programs, and has stayed out of the public spotlight since.

The Caval scandal prompted investigations by the country’s tax authorities as well as the public prosecutor’s office and two congressional commissions, which issued a report describing Caval as a lobbying firm“whose profile and comparative advantage lies in its political and government connections.”

Mr. Toledo, the prosecutor, said this week that there was insufficient evidence to charge Mr. Dávalos.

Ms. Bachelet has said she was not aware of the business dealings of her son and daughter-in-law. Even so, her ratings in opinion surveys have fallen steeply. In a poll by Plaza Pública Cadem released this week, just 25 percent of respondents said they approved of her presidency.

The Caval matter is one of a series of high-profile corruption scandals that shook the corporate and political establishment of Chile over the past year, involving collusion and price-fixing by major industries and companies, illegal corporate financing for electoral campaigns and misuse of military spending.

“These times have been hard and very painful for me and my family,” Ms. Bachelet said in a statement Friday. “Chileans demand and deserve equal opportunities and rights, and this also means equality before the law.”