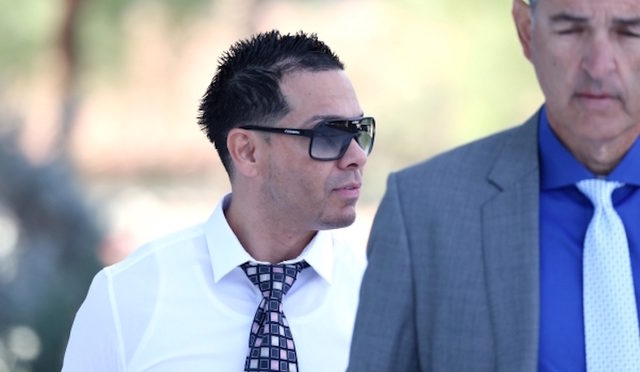 Ernesto Ramos is appealing his 366-day prison sentence for using sex tapes to extort $200,000 from a wealthy businessman.

His lawyer, Kathleen Bliss, filed notice late Thursday that she would be asking the 9th U.S. Circuit Court of Appeals in San Francisco to review the sentence handed down by Chief U.S. District Judge Gloria Navarro two weeks ago.

Ramos’ previous lawyer, Gabriel Grasso, disclosed at the sentencing that the unidentified married businessman had offered Ramos money to keep his identity secret for the rest of his life, just days before Ramos pleaded guilty in November.

But Grasso, who said he kept his distance from the settlement talks, told Navarro that his client believed the offer was made to pressure Ramos into taking a guilty plea. Grasso had sought probation for Ramos.

Bliss, a former longtime federal prosecutor, called the civil negotiations at the sentencing a “reverse extortion” and asked Navarro for more time to present evidence that there was“undue outside influence” over the plea agreement.

But the judge denied the request.

Federal prosecutors have gone to great lengths to protect the identity of the prominent businessman, including obtaining a protective order that keeps his name, initials and company’s name out of court documents.

An FBI complaint identifies the victim only as a married local resident who has two minor children and who is “part-owner of a well-known business” with access to a company jet.

Over a two-year period, the businessman tipped a stripper, who was Ramos’ girlfriend, about $200,000 to dance and have sex with him in a private room at an adult nightclub, the criminal complaint said.

The dancer, who has not been identified, secretly used her cellphone to videotape herself having sex with the businessman in a hotel room during an October 2014 tryst outside the country, according to the complaint.

Ramos acknowledged in his plea agreement that he later tried to extort $200,000 from the businessman with threats that included posting embarrassing sex photos from the tapes on social media.

Bliss will have about three months to file a brief with the appeals court outlining her arguments for overturning her client’s prison sentence.

Ramos, who is free on his own recognizance, has until Sept. 28 to surrender to federal prison authorities.