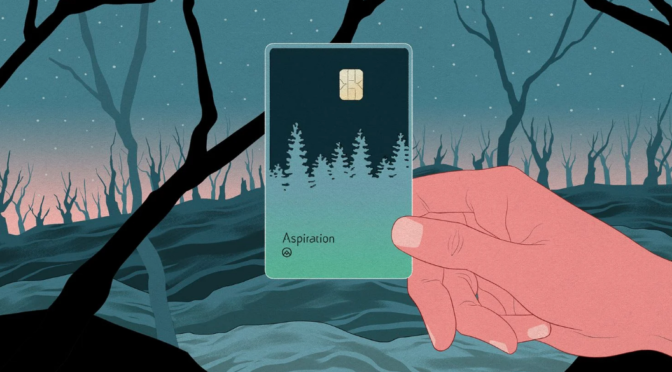 Aspiration is among a group of companies that provide banking and financial services, and promise to help the environment. But so far its marketing is greener than its reality.

ProPublica is a nonprofit newsroom that investigates abuses of power. Sign up to receive our biggest stories as soon as they’re published.

You can save the planet with a swipe of your bank card. That’s the enticing proposition made by a company called Aspiration, which promises to take the leftover change from customers’ purchases and use it to plant trees around the world. Aspiration is on track to spend $149 million this year marketing that message, according to its financial documents, considerably more than the revenues the company expects to take in.

“Clean rich is the new filthy rich,” Aspiration proclaims on billboards across New York, Texas and California. Other ads, ubiquitous on social media, feature images of Aspiration’s debit card, which depicts a green treescape and is made from recycled plastic. The likes of Leonardo DiCaprio, Orlando Bloom, Robert Downey Jr. and Drake have invested in the company. Aspiration has received enthusiastic press coverage (with the exception of a critical dissection by New York University marketing professor Scott Galloway). And the company won further headlines in September for its reported $300 million, 23-year sponsorship deal with the Los Angeles Clippers, which will feature Aspiration’s name on signs inside the Clippers’ new arena, give the company a role in sustainability initiatives and put its logo on the jersey of every Clippers player.