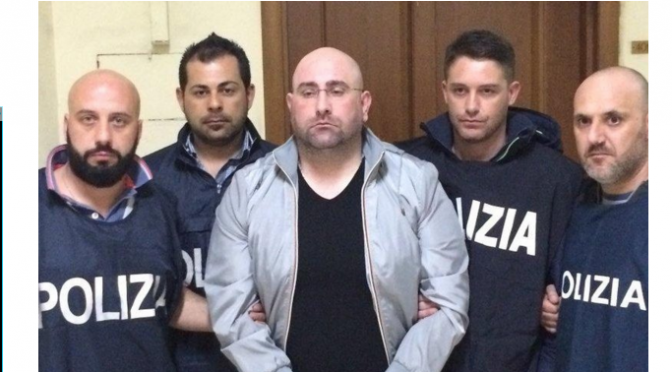 An alleged mafia chief’s appetite for pizza has cost him his freedom.

Roberto Manganiello, 35, an alleged boss in Naples’ notorious Camorra mafia in southern Italy, has been arrested by detectives disguised as pizza boys who delivered food to his home as he was watching a football match.

Mr Manganiello, one of Italy’s most-wanted crime bosses, had been on the run since 2013.

He was watching the Naples-Inter soccer match on Saturday with his girlfriend when the operation took place this weekend in Caserta, near Naples.

He has been sought since 2013 for two killings in 2004 that launched a clan feud. Police said he also ran a drug and extortion ring and he has been listed as one of “Italy’s 100 most dangerous criminals”.

Mr Manganiello was unarmed and did not resist arrest. A 30-year-old Neapolitan woman was arrested with him.

Angelino Alfano, the interior minister, said on Sunday the arrest was “the result of a high-level investigation” with coordination across several agencies.

It was reported by Germany’s Deutsche Welle that the investigation included at least 50 people working in a team tracking his movements.

Adding to Mr Manganiello’s humiliation, Milan defeated his home team 2-0, all but crushing Naples’ hopes of a first Serie A title in 26 years.

The Camorra is based in Naples and the surrounding region of Campania and has never been stronger than it is now, and is second only in wealth and ruthlessness to the ‘Ndrangheta mafia of Calabria, an expert on organised crime told the Telegraph earlier this year.

In the past, there were more than 100 semi-independent clans within the Camorra, often at war with each other.

In August 2011, Italian and Spanish police swooped on Salvatore D’Avino, then one of Italy‘s most wanted fugitives, as he was filling his car with petrol in a town on the Costa del Sol.

D’Avino, 39, alleged to be a member of the Camorra mafia, had been on the run for four years.