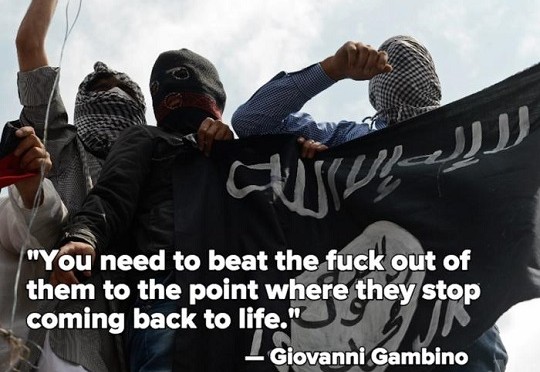 A significant majority of the country recently spoke up in a NY Times/CBS poll saying that they had essentially given up hope that the President was going to figure out what to do about the JV Team. These perceptions were likely buttressed a bit when the White House informed us that ISIS was largely “contained” just hours before they lit up Paris like a pinball machine. So maybe we need a new approach? Anonymous apparently declared war on the terrorists recently, though aside from ruining their credit rating I’m not sure exactly what they’re going to accomplish. But lo and behold, a new force is stepping up to the plate and may be positioned to do something a little more… forceful. It arrives in the person of Giovanni Gambino (yes, from those Gambinos) and if nothing else he seems to have the messaging right. (Apologies for NSFW language in graphic and several quotes to come.)

“These people are like walking machines. ISIS brainwashes them through the Internet,” Giovanni Gambino told Mic of the terrorist threat. “You need to beat the fuck out of them to the point where they stop coming back to life.”

Gambino, a prolific author of mob history and a scion of the family that saw the rise of the likes of John Gotti and Paul Castellano, said the nature of the mob made it fundamentally better equipped than traditional law enforcement to handle a threat like ISIS.

“Back in the day, probably the safest place ever was an old Sicilian neighborhood like Bensonhurst or Knickerbocker Ave.,” said Gambino of two Brooklyn neighborhoods. “We got our kids going to those schools. We got families in those neighborhoods.”