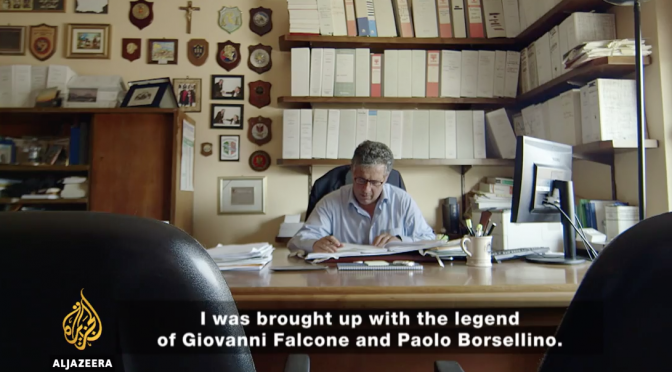 The British actress explains why she decided to narrate the documentary A Very Sicilian Justice.

I am passionate about Italy – in particular the people and places of South Italy – and I have a much-loved home there.

Italy has a dark history of mafia violence and political corruption. But it also has many incredibly brave and brilliant public servants – police, magistrates and politicians – who risk their lives and careers day in, day out to fight this enemy within. The threats they receive also put their family life under terrible strain.

These largely unsung heroes need to be recognised and supported.

At the heart of the documentary A Very Sicilian Justice is the astonishing and shocking story of one man – a public servant – who lives in fear and whose freedom is severely restricted simply because he is doing his job.

I also have a personal connection to the events described in the documentary. A close friend – the architect we employed to build our house in Italy, Brizio Montinaro – lost his brother in 1992 in the explosion of mafia violence described in the film.

Antonio Montinaro was a police bodyguard who died alongside the famous anti-mafia prosecutor, Judge Giovanni Falcone, in a bomb attack as he escorted the judge along the Palermo motorway. Falcone’s wife and two other bodyguards were also killed.

Today, almost 25 years later, Judge Antonino Di Matteo is investigating the criminal and political context behind these and other killings and, incredibly, finds himself under tremendous threat for doing so.

The murder plot and threats against Judge Di Matteo show that these events from the past are still very much alive today.

As Di Matteo says in the film, unless Italy faces up to and uncovers the truth behind this tragic period in its recent history, the events of this terrible “season of terror” will continue to poison and polarise Italy’s body politic for ever.

In Italy, the ongoing trials and investigations into this period are little reported. Internationally, this story is virtually unknown.

I hope that A Very Sicilian Justice, by bringing these important events to a worldwide audience, will give added support and recognition to Judge Di Matteo and his colleagues.

Many think Italian organised crime and corruption are confined somehow within Italy’s borders, but this is a dangerous misunderstanding of what “mafia” is.

The proceeds of crime are not only invested abroad and hidden in international tax havens. According to Italian investigators, mafias worldwide have changed their modus operandi. They are increasingly sophisticated, work together and operate more quietly than before through political corruption and by infiltrating the business and financial worlds.

Despite the recent referendum result in the UK and the potential knock-on effect of a severely divided Europe, I passionately believe countries, now more than ever, need to be vigilant, cooperate and unite if we are to win the battle against organised crime and political corruption.