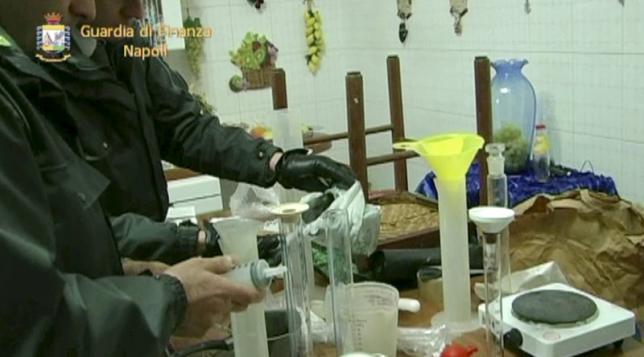 Italian Guardia di Finanza police inspect a cocaine refining laboratory, which was raided on Wednesday, in a town on the slopes of the Vesuvius volcano south of Naples, in this still image taken from a Guardia di Finanza video, February 17, 2016.
REUTERS/GUARDIA DI FINANZA/ HANDOUT VIA REUTERS

Italian mobsters make as much money trafficking narcotics in Italy as Fiat does selling cars, but without having to pay taxes, the anti-mafia prosecutors office said on Wednesday.

“It’s as if the main national carmaker together with its suppliers, service providers and dealerships paid all their salaries and suppliers, and produced everything completely off the books and without any regulation, and then sold and reinvested everything without paying any taxes,” the annual report by the anti-mafia prosecutor’s office said.

“The small difference is that the profit margin for the drug traffickers is at least 10 times higher than any industrial manufacturer.”

It said the Calabrian mafia, known as the ‘Ndrangheta, had become Europe’s top supplier of South American cocaine.

Thanks to “privileged” ties with South American criminal groups that “recognize the full trustworthiness of the Calabrian clans”, the ‘Ndrangheta has also set itself up as the main supplier of cocaine to other mafia groups in Italy, it said.

From July 2014 to June 2015, Italy seized almost 4 tonnes of cocaine, a decrease of more than 8 percent from the previous period. In the port of Gioia Tauro in Calabria, 3 tonnes of cocaine have been seized by police in the past three years.

The report was comparing earnings to Fiat in Italy, not the work of the wider Fiat Chrysler group worldwide.