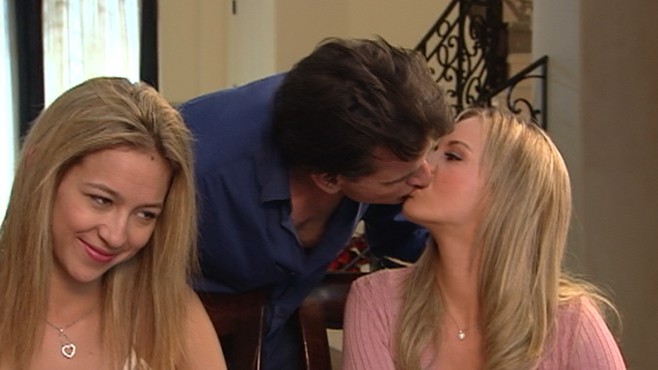 Charlie Sheen will tell the world about his HIV diagnosis on Tuesday – a secret he kept hidden partially out of concern he’d face legal consequences, sources say.

“The interview could open up a lot of sympathy for him, but he has to be concerned about a fear of litigation from former sexual partners,” Howard Bragman, a Hollywood publicist and crisis manager approached by those close to Sheen, told PEOPLE of Tuesday’s scheduled Today show sitdown. “You don’t take that lightly.”

Now, the question is when Sheen learned he has HIV and whether any of his exes are at risk. Could the Two and a Half Men star really face charges if he didn’t tell sexual partners about his condition?

In California, it’s illegal to intentionally pass on a sexually transmitted disease – so the state would have to prove Sheen desired to “use HIV as a weapon,” saysScott Burris, the director of the Center for Health Law, Policy and Practice and a professor at Temple University’s Beasley School of Law. Burris is not aware of a single case in which that was proven.

“California has one of the narrowest laws. It’s unlikely that he intended to infect anybody,” he tells PEOPLE. “But who knows where he had sex, and there are states with different laws, and in some of them, it’s enough to expose someone to fluids. In fact, in some states you can be charged even if you used a condom.”

Burris is a vocal proponent of decriminalizing HIV, pointing to research showing putting people behind bars doesn’t reduce the spread of the disease and only “makes people hide.”

But there’s nothing to stop Sheen’s past sexual partners – he’s admitted to soliciting prostitutes, was married three times and once lived with two girlfriends he called “goddesses” – from going to court if they contracted HIV from him.

“He is at risk at losing civil judgments to all the lovers that he’s had if he knew that he was infected and never told them,” Susan Moss, a family law attorney at Chemtob Moss & Forman, tells PEOPLE.

Moss says someone who contracted HIV from Sheen could sue for millions, and that even exes who didn’t get HIV – but slept with him if he had it and did not disclose that – could file civil suits.

“I could only imagine the level of emotional distress that a person is put under when they find out that somebody they had unprotected sex with probably multiple times has this disease and never told them,” she says. “Plus, now everyone in Hollywood is going to know that they’ve been exposed to somebody with HIV, and that also can affect their future relationships. All of these things are actionable.”

Yet as Catherine Hanssens and Allison Nichol from the Center of HIV Law & Policy – which seeks to protect the rights of those living with the virus – stress, HIV has become a manageable medical condition.

“I’m worried that people are talking about HIV as if it is a deadly disease and asking these type of questions 35 years into the epidemic. It’s a little bit like asking us what we would do if we found out that the moon was made out of green cheese,” says Hanssens, the center’s executive director and founder. “HIV is hard to transmit, and it’s very easy to prevent transmission.”

“Many people’s view of HIV is sort of stuck in the 80s and the early ’90s, and I think there’s a lack of information on the part of the American public. The understanding of what it means to be a person with HIV in 2015 is lacking,” adds Nichol, the organization’s co-director. “HIV is viewed as much more on par with someone who has type I diabetes than what people’s I think internal view of this going back to the early 80s is.”

This means any lawsuits, even by people who may have contracted HIV from the actor, wouldn’t be easily won, Burris says.

“His case also reflects the fact that in a very real way, treatment has changed the equation. If he is infected and has been getting treatment that is successfully suppressing the virus in his system, he’s not at terrible risk of infecting anybody, because it’s now our national policy to get people on treatment so that they won’t transmit the virus,” he explains.

Moreover, Sheen’s playboy reputation could work in his favor. In a negligence case, his partners arguably would have known that he has been in more than one relationship in his life, and by today’s standards should have practiced safe sex, Harris says.

“Charlie Sheen is a well known public figure. I don’t think it could possibly be a credible claim that people did not know he was a person who was perhaps sexually active with more than one individual. I think you have to make that presumption about anyone unless it’s someone that you’ve been in a longterm, exclusive relationship with,” Nichol says, arguing that “there’s a shared responsibility for sexual health.”

It’s an issue that reaches far beyond Sheen’s bombshell revelation. Laws punishing people for transmitting STDs have been scaled back as new information about and treatments for them emerge, and people like Hanssens and Nicho dedicate their lives to destigmatizing HIV.

But Moss believes people who deceive their sexual partners should be held accountable by the law.

“I think if you put somebody at risk for a life-threatening disease, you are as dangerous as a criminal as somebody who points a gun at another person,” she says. “There’s no difference. Your weapon is sex, their weapon is a gun.”