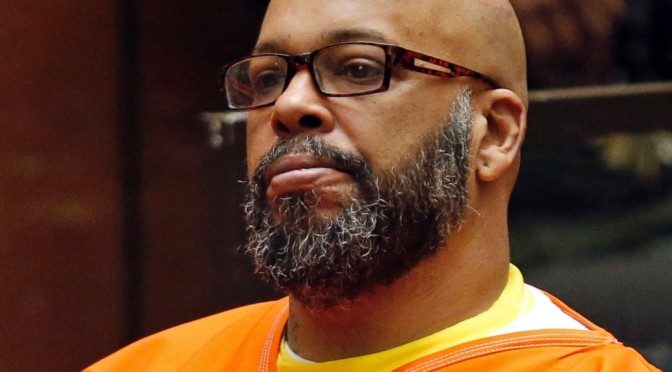 Former rap mogul Marion “Suge” Knight and comedian Katt Williams pleaded not guilty Tuesday to robbery charges filed against them after a celebrity photographer accused them of taking her camera last year.

The pair appeared briefly in a Los Angeles courtroom Tuesday and entered the pleas, which needed to be re-entered because a judge determined two weeks ago that they should stand trial for the September 2014 incident in Beverly Hills.

Los Angeles Superior Court Judge Ronald S. Coen on Tuesday admonished Knight because the Death Row Records co-founder had held up a sign conveying a happy birthday message to his son for cameras during his last court appearance two weeks ago.

“If he does it again, I will shackle his hands to a chair,” Coen said. Knight, 50, acknowledged he understood the judge’s warning.

Coen has taken a hard line with Knight, who had a series of medical episodes in court and refused to leave his cell for one hearing, prompting the judge to sign an order to have him forcibly brought to hearings if necessary.

Knight’s attorney denies the Death Row Records co-founder was involved in taking photographer Leslie Redden’s camera last year, just days after he was wounded in a nightclub shooting. His attorneys have cited the wounds as causing some of his courthouse medical episodes.

Attorney Thomas Mesereau said Oct. 13 that threats Knight made toward Redden were attempts to get her to not shoot photos of his young son.

“The only evidence that exists is he didn’t want his son photographed,” Mesereau said. “Any father would have acted as he did.”

Redden recorded a verbal confrontation with Knight on a camera hanging from her neck, but the device did not capture the physical struggle over her professional camera.

Knight remains jailed on $10 million bail in a separate murder case filed after he ran over two men outside a Compton burger stand in January, killing one and seriously injuring an adviser to the film “Straight Outta Compton.” Knight’s lawyers have said he was fleeing armed attackers when he hit the men.

Knight has pleaded not guilty and already been ordered to stand trial in that case, but no trial date has been set. Coen set a Dec. 11 court hearing to get an update on the case.

Knight was a key player in the gangster rap scene that flourished in the 1990s, and his Death Row Records label once listed Dr. Dre, Tupac Shakur and Snoop Dogg among its artists. He lost control of the company after it was forced into bankruptcy.

He faces potential life sentences if convicted in either case because of prior convictions for armed robbery and assault with a gun.

Williams, 44, has starred in several comedy specials and appeared in films such as “First Sunday” and “Friday After Next.”

The next hearing in the robbery case is scheduled for Nov. 30. No trial date has been set.

This story has been corrected to show that Knight is being held on $10 million bail in a murder case, not without bail.

Anthony McCartney can be reached at http://twitter.com/mccartneyAP