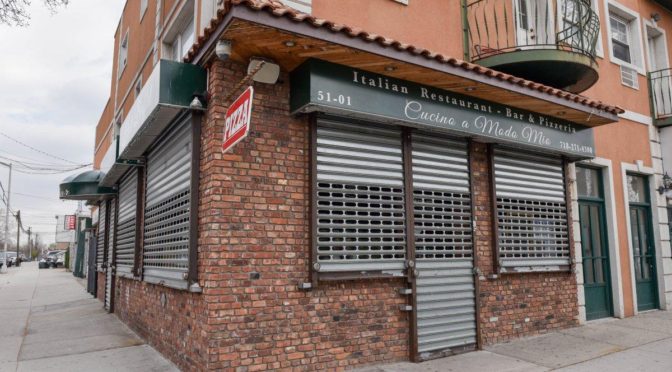 The wife of a mob-connected Queens restaurant owner who trafficked drugs admitted on Monday to pushing the narcotics through the eatery’s basement.

She faces a minimum mandatory sentence of five years in prison and also agreed to pay a $1.625 million forfeiture judgement.

Judge Raymond Dearie could sentence Gigliotti to the maximum of 171/2 years behind bars.

Gigliotti, 56, was slated to go to trial at the end of March for smuggling more than 110 pounds of cocaine from Costa Rica in shipments of cassava to her family’s restaurant, Cucino a Modo Mio, in Corona.

If Gigliotti had been convicted at trial, she could have faced life in prison, authorities said.

The Gigliotti family allegedly has ties to the Genovese mob family and served as a connection to the ’Ndrangheta crime group in Italy.

Prosecutors said in 2014 that Gigliotti had traveled to Costa Rica with more than $360,000 in cash that she delivered to cocaine dealers.

Gigliotti also agreed to forfeit the property seized, including $124,874 in cash, seven handguns recovered from the business, ammunition, an automated money counter and brass knuckles, according to a law enforcement source.

Her husband, Gregorio, 60, and 36-year-old son, Angelo, were convicted on drug and guns charges after a jury trial last July.

They face mandatory minimums of 15 and 20 years behind bars, respectively.

At the trial, Dearie concluded that lawyers for Gregorio Gigliotti and his son had tried to stack the jury with women by using all their preemptory challenges to exclude men.

After a panel of 10 women and two men was selected, federal prosecutors Margaret Gandy and Keith Edelman complained that the defense had discriminated against men.

Dearie later ruled that after reviewing the transcript of jury selection, he found “a pattern of attempting to exclude men” and was going to restore two men back on the jury.

At the time, defense lawyers Elizabeth Macedonio and Alan Futerfas had insisted that there was no bias against men — explaining that some of the challenges were based on “gut” feelings.

It didn’t work — and jurors found both men guilty on July 22 after deliberating for just three hours.