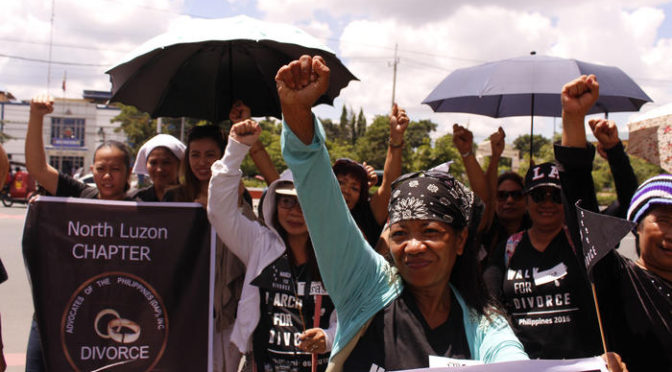 Ana P. Santos
What do you do when you find yourself in an unhappy marriage but live in a country where there is no divorce?

“I didn’t have anyone to talk to,” said 45-year-old Maviv Millora. “I was sure there were others like me who wished there was divorce in the Philippines, I just had to find them.”

After being married for more than 20 years, Millora separated from her husband in 2011. Since then, it’s been a vicious cycle of survival. She supports the two youngest of her four children with her earnings as an English teacher. She cannot claim child support since she is still technically married, but she also can’t afford the considerable legal costs of separation proceedings.

Some members were depressed and wanted to talk; some were angry and wanted to vent; and some just wanted legal advice without going to a lawyer who would charge by the hour – but they all wanted to demand the legalization of divorce.

In this devout Catholic country with deeply conservative views on marriage and family, Millora and others like her were expected to hide any cracks in the marital union and simply suffer in silence.