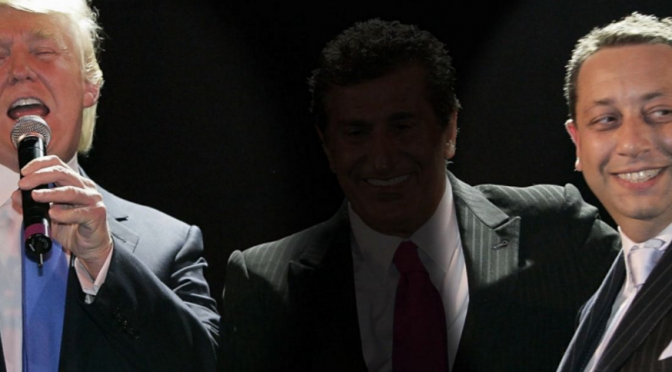 Republican presidential candidate Donald Trump has downplayed his connection to a reputed mob figure, whose daughter said gambled millions at Trump’s casino, partied on the billionaire mogul’s yacht and flew in his helicopter, Yahoo News reported.

However, Trump’s casino was fined $200,000 by the state of New Jersey Casino Control Commission after an investigation by the state attorney general’s office found that Trump Plaza in Atlantic City violated anti-discrimination laws to please high roller Robert LiButti — who was reported to have close ties to mafia boss John Gotti.

After the incident in 1991, Trump told the media he didn’t really know LiButti. However, LiButti’s daughter, Edith Creamer, told Yahoo News reporter Michael Isikoff that was not the case.

“He’s a liar,” Creamer told Yahoo. “Of course he knew him. I flew in the [Trump] helicopter with [Trump’s then wife] Ivana and the kids. My dad flew it up and down [to Atlantic City]. My 35th birthday party was at the Plaza and Donald was there. After the party, we went on his boat, his big yacht. I like Trump, but it pisses me off that he denies knowing my father. That hurts me.”

Trump told Yahoo News in a written response, “During the years I very successfully ran the casino business, I knew many high rollers. I assume Mr. LiButti was one of them, but I don’t recognize the name.”

The report comes as Trump is fending off calls to release his tax returns. Trump’s leading GOP opponent, Texas Sen. Ted Cruz, said Trump might be trying to hide evidence of mafia connections in the tax returns.

Trump was not held personally liable for the discrimination charges against his casino, nor did state officials ever question him personally about the matter.

At the time, New Jersey state regulators had launched an investigation into allegations by nine employees of one of Trump’s Atlantic City casinos, the Trump Plaza, that the hotel had repeatedly removed African-Americans and women from craps tables after LiButti, one of the highest-rolling gamblers in the city’s history, loudly complained about their presence when he was playing.

The probe resulted in a $200,000 fine against the Trump Plaza by the New Jersey Casino Control Commission for violating state anti-discrimination laws. Investigators found that LiButti had, on multiple occasions, berated blacks and women using what one state official described as the “vilest” language — including racist slurs and references to women in obscene terms — and that the Trump Plaza, in order not to lose his substantial business, sought to accommodate him by keeping the employees away from his betting tables, according to commission documents recently obtained by Yahoo News under the New Jersey Open Public Records Act.

Cramer’s account of direct dealings between her father and Trump corroborate a 1991 book, “Trumped: The Inside Story of the Real Donald Trump, His Cunning Rise and Spectacular Fall,” written by John R. Donnell, former president of the Trump Plaza casino. The book also talks about a meeting between Trump and LiButti aboard Trump’s helicopter and claims Trump agreed to pay $500,000 for a racehorse named Alibi from LiButti, a horse breeder.