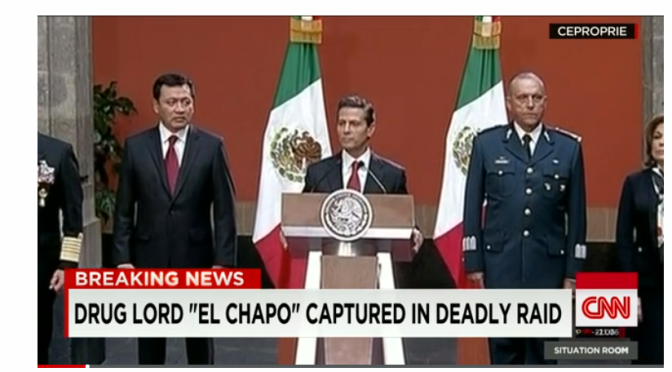 “Mission Accomplished,” President Enrique Peña Nieto announced via Twitter. “We have him.”

Members of Mexico’s navy caught Guzman in an operation at about 4:30 a.m. (6:30 a.m. ET) in the coastal city of Los Mochis in Sinaloa state, a senior law enforcement official in Mexico told CNN.

Several people aligned with Guzman died in the raid, the official said. The Mexican navy put the number of dead at five, with six others arrested. No navy personnel were killed, and only one was injured.

Peña Nieto said the recapture of Guzman culminates “days and nights” of collaborative work among Mexican intelligence and police agencies.

“They are a pride to our nation,” he said, referring to the multi-agency operation in an address at the National Palace in Mexico City.

Without specifically mentioning how Guzman had already twice escaped from Mexican prisons, the Mexican President said the recapture of Guzman ought to restore Mexicans’ faith in their government and justice system.

Friday’s announcement marked the third time that Guzman was captured by Mexican authorities.

“Today our institutions have demonstrated one more time that our citizens can trust them, and our institutions are at the level needed to have the strength and determination to complete any mission that is granted to them,” the President said.

Guzman’s recapture represents a major success in what has been an embarrassing ordeal for Mexico. For many, “El Chapo” has been a symbol of the Mexican government’s ineptitude and corruption.

He has led one of the country’s most powerful, violent drug cartels and escaped maximum-security prisons not once, but twice, the latest in July when he busted out through a hole into a mile-long tunnel and then on to freedom.

Last year’s breakout spurred major criticism about the Mexican government’s ability to safeguard such a notorious criminal, with some saying he should have been held in the United States.

U.S. officials were aware of the operation to capture Guzman, according to a law enforcement official.

The Americans provided assistance in the search, but his capture was the Mexican government’s operation, the official said.

Mexican authorities were closing in on him for at least 24 hours before special forces moved in. The official said it’s not a surprise El Chapo was located in Sinaloa.

“There was a belief he was in Sinaloa. That was his refuge. We would have been surprised if it were anywhere but Sinaloa,” the official said.

Some U.S. officials were skeptical that Guzman would ever be captured again, especially alive, given the amount of protection he has in Mexico and his ability to escape prison twice, the official said.

The raid began after a citizen complained about armed people in a home, and when Mexican special forces went to the scene, they were fired upon by alleged members of organized crime, the Mexican navy said.

On Friday, Mexican authorities released a video of a person identified as Guzman, whose head was covered and who was being led by several armed officers from a vehicle to an airplane. They released a video of a white structure where the raid occurred, and the footage showed several weapons.

In all, authorities seized four armored vehicles, eight rifles, a handgun, ammunition, and a tube rocket launcher with two charges, the Navy said.

Led one of Mexico’s richest, most violent cartels

Born in Badiraguato in Sinaloa state, Guzman started his career in the drug trade working for Miguel Angel Felix Gallardo, according to Time magazine in 2009.