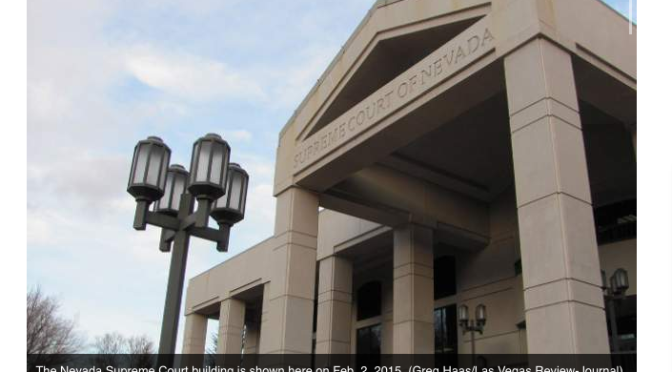 A former Las Vegas stripper, who has spent 16 years in prison for killing six teenagers working on a road cleanup crew, is appealing once again to the Nevada Supreme Court.

A jury found Jessica Williams guilty in February 2001 of six counts of felony driving with a prohibited substance in her blood, part of the state’s law on driving under the influence.

Michael Pescetta, assistant federal public defender, argued that state laws regarding marijuana residue and driving under the influence conflict with one another. In one statute, marijuana metabolite does not qualify as a prohibited substance, he said.

“Why does this one (statute) control and not that one? This situation is at best a tie,” he said, adding that a “tie goes to the defendant.”

A panel of three — Chief Justice James Hardesty and Justices Nancy Saitta and Kristina Pickering — heard about 30 minutes of arguments Thursday but did not make a ruling.

Williams, who was 20 at the time of the March 2000 crash, admitted that she had smoked marijuana two hours before she fell asleep behind the wheel of a white Ford van. Her lawyer at trial said that she had used the stimulant-hallucinogen Ecstasy 10 hours earlier but maintained that she was not impaired and simply fell asleep before her van ran off Interstate 15 just north of Las Vegas.

Six teenagers died when the van veered into the I-15 median near Las Vegas Motor Speedway at a spot where a youth offenders work crew had been assigned to pick up trash.

Pescetta wrote in court papers that Williams was denied fair warning that having marijuana metabolite in her blood would subject her to criminal liability.

He argued before the court that prosecutors did not thoroughly examine the conflicting statutes because the “notorious case” gained so much public attention.

Chief Deputy District Attorney Bruce Nelson said the high court had previously ruled — in 2004 — that state law was not vague.

“What’s changed?” he said. “Nothing. There is absolutely nothing new in this case.”

Hardesty responded: “I’m not sure the 2004 decision addressed the conflict adequately.”

Nelson also said that medical marijuana was not legal at the time in Nevada. Since legalization, people can still face prosecution for driving under the influence of medical pot.

Pescetta also argued that her previous attorney, John Watkins, failed to raise the issue that marijuana metabolite was not a prohibited substance at the time of the crash. The prosecutor said Watkins’ representation was effective.

Williams, 36, remains in custody at the Jean Conservation Camp.

Contact reporter David Ferrara at dferrara@reviewjournal.com or 702-380-1039. Find him on Twitter:@randompoker