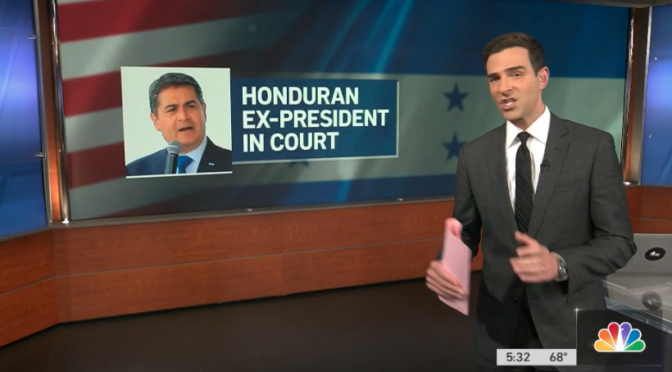 Juan Orlando Hernandez was extradited last month on charges that he received millions of dollars from 2004 to 2022 to support a drug trade that delivered hundreds of thousands of kilograms of drugs to the U.S.

“We’re going to subpoena El Chapo,” said defense attorney Raymond Colon. “If the judge orders it, the government will have to produce him. We’ll hear what he has to say.”

El Chapo is currently serving a life sentence in a U.S prison for a massive conspiracy that utilized killings and corruption to support drug trafficking for over two decades.

Colon said Hernandez denied taking millions in payoffs from El Chapo and other murderous drug kingpins in exchange for helping them transport large amounts of drugs through Honduras to the U.S. He said he expected El Chapo would verify that claim, if he were able to get him to testify.

Hernandez pleaded not guilty in federal court in Manhattan. Wearing a blue jailhouse uniform, Hernandez said in Spanish, ”Not guilty your honor” during Tuesday’s hearing before Judge P. Kevin Castel.

Hernandez was extradited to New York on April 21 on the drug trafficking-related charges. Drug Enforcement Administration agents said while publicly promising to help the U.S. fight drug trafficking, privately he was working closely with the cartels.

After Tuesday’s hearing, defense attorney Colon said he would try to subpoena other long-shot witnesses – like former Presidents Trump and Obama as well as former top U.S. security officials like John Kelly and Mike Pompeo.