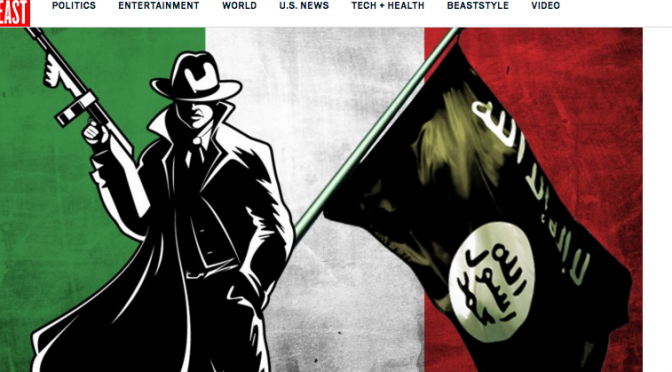 The mobsters have the weapons, and they’re making a killing selling them off to Islamic radicals.

CASTEL VOLTURNO, Italy — By the time Aziz Ehsan, a 46-year-old Iraqi, was arrested near Naples on Tuesday, local anti-mafia police had already been trailing him for days to determine just why he was in the heartland of the Camorra crime syndicate’s territory. He was well known by both the French and Belgian secret services, which list him as a suspected ISIS contact. The Neapolitan cops were also aware of an international arrest warrant for him in Switzerland, where he was wanted in connection with a variety of offenses, including forgery, assault, and possession of illegal weapons.

He was apparently just the type of person Italian authorities thought might provide a valuable clue as they work to piece together the details of the complex relationshipbetween Jihadist fighters and Italy’s various mobs.

But when the attacks took place in Brussels, the authorities decided it was time to move in and get him. He was arrested as he slept in a car with Italian license plates registered to a deceased man on Tuesday and is awaiting extradition to Switzerland, France, or Belgium.

He claimed that he was in the area to scout out luxury hotels for rich Iraqi tourists, but the police didn’t buy it; he appeared to have been living in the car for days. They also pointed to an absence of notebooks, a laptop, or tablet—items you’d think to bring on a research trip. His no-frills, no contract “burner” cellphone, like the kind favored by Western jihadis, was another sign that Ehsan wasn’t in the region to see which five-star hotels offered the best glass of Limoncello.

“We executed a European arrest warrant near Naples and arrested an Iraqi citizen known to the Belgian and French secret service,” Italy’s interior minister Angelino Alfano declared after his arrest. “He was in contact with terrorists.”

Ehsan’s presence in Italy very likely posed no imminent threat to anyone in this country, but it may be extremely significant in Europe’s losing battle against ISIS-motivated terrorism. Authorities now want to know if Ehsan was here on business, especially if he was working with the Camorra to secure false documents or illegal arms—both big moneymakers for the Neapolitan clans.

Since the Charlie Hebdo attacks in Paris in January 2015, Italian anti-mafia and anti-terrorism officials have been unraveling long-standing connections between Jihadi fighters and the Camorra in Naples. They have also uncovered ties to the Sicilian Cosa Nostra Mafia and the Calabrese ‘Ndrangheta gang, tracing weapons being trafficked in from the former Yugoslavia and several African nations which allegedly arrive easily in Neapolitan ports.

Italian anti-mafia police have made three major arrests in the last 12 months, during which they have confiscated major weapons arsenals that included Kalashnikov rifles, submachine guns, body armor, and hundreds of rounds of ammunition that were ready to be sold to terrorist connections. They even found a price list for a wide variety of weapons available for prices ranging from €250 to €3,000 that was printed in Arabic, French, and Italian.

“Naples has been, for many years, a central logistics base for the Middle East. The Camorra is also active in the world of Jihadist terrorism that passes through Naples,” Franco Roberti, a prominent anti-mafia prosecutor, told The Daily Beast before the Brussels attacks. “Naples lends itself to this type of activity. In the past there have been contacts between Jihadi militants and the Camorra clans.”

He says that Italy’s mafia-fighting forces have “thwarted plots and synergies” between the terrorists and the mobsters. What’s not known, of course, is how many plots they’ve missed.

It is certainly a well-known fact that the Camorra runs a highly successful enterprise in the lawless Neapolitan hinterland running drugs, illegal arms and forged documents that make it especially easy for anyone entering Europe illegally to pass through even the tightest borders. It is just as well-known that the main client base has never been strictly Italian.

“We have evidence that groups of the Camorra are implicated in an exchange of weapons for drugs with terrorist groups,” Pierluigi Vigna, Italy’s national anti-mafia prosecutor, said before he passed away in 2012.

Vigna’s words were quoted in a variety of Wikileaks cables that imply that the United States government has been well aware of the terrorist-mafia connection for some time. “Criminal interaction between Italian organized crime and Islamic extremist groups provides potential terrorists with access to funding and logistical support from criminal organizations with established smuggling routes and an entrenched presence in the United States,” according to one cable on Italy penned by the FBI.

Investigators say logistics help in moving Jihadi fighters through Europe is one of the hardest rackets to crack. Last summer, Salah Abdeslam, who, until last week, was the most wanted man in Europe for his role in the deadly terrorist attacks in Paris, traveled freely through Italy with the help of a network of what could be referred to as mafia-sponsored terrorism travel agents.

Authorities in Italy say he boarded a ferry in Bari headed for Greece last August, and that he used a pre-paid Italian debit card until the Paris attacks. Authorities say he used his real name tied to fake Italian documents in both instances.

The idea of Europe’s most wanted man running free is concerning enough. But what is at least as worrying is that the weapons being trafficked into Italy will end up being used in European capitals. Michele del Prete, an Italian counter-terrorism official who has been focusing on the links between organized crime and violent jihadists, warns that the two forces of evil have found a comfortable partnership. “It is established and proven that the lawless climate in Naples has often created favorable conditions for logistical support, exchange of weapons, and false documents,” he said. “There are specialized groups we have tracked in various municipalities and prefectures that we know are facilitating terrorism.”

Investigator Roberti takes it a step further. “Campania, especially the province of Caserta and Castel Volturno, is one of the main gateways into Europe for those who want to become a terrorist,” he said. “It has been demonstrated by numerous investigations. On this now, there are no doubts.”